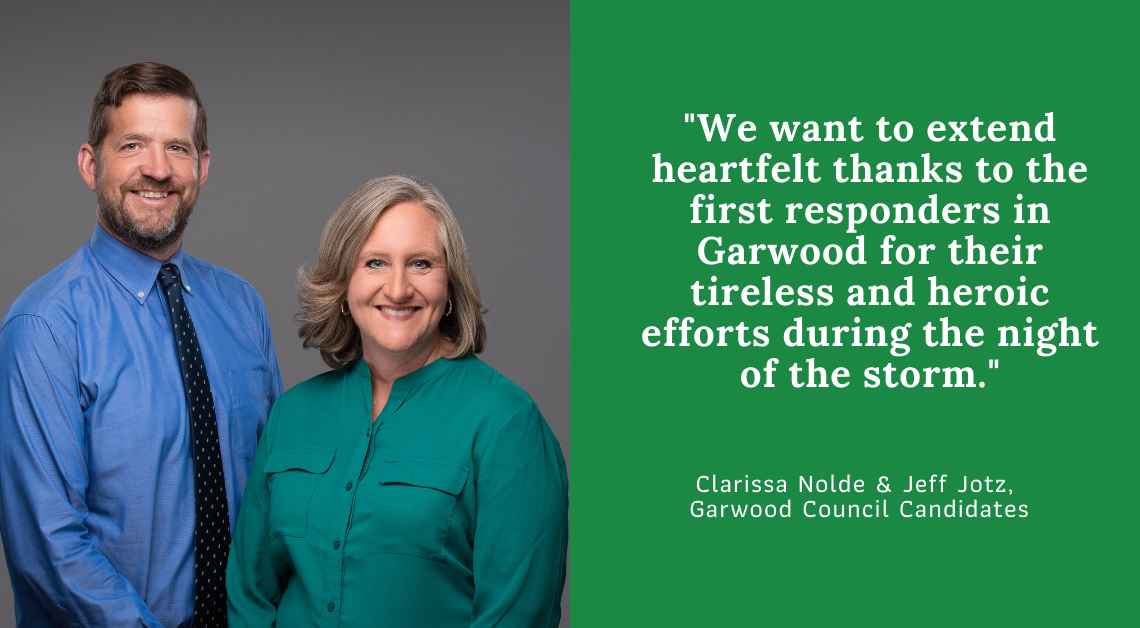 We want to extend heartfelt thanks to the first responders in Garwood for their tireless and heroic efforts during the night of the storm. The remnants of Hurricane Ida brought 10 inches of rain within a period of hours, resulting in serious flooding and the loss of at least 25 lives across New Jersey. Our police, volunteer firefighters and first aid squad risked their own safety in an extremely dangerous situation for the well-being of others and for this we owe a debt of gratitude. We also thank our Department of Public Works for their hard work in the ongoing clean-up of last week’s devastating storm, even as their own building on South Avenue was damaged by it.

Our Republican opponents immediately sought to capitalize on this natural disaster to aid a pre-planned political attack claiming the Garwood Democrats do not support the DPW. While the Democratic majority on Council has made investing in infrastructure and supporting all of Garwood’s departments top priorities since 2018, Republican opposition to properly funding the DPW in Garwood is both historic and well documented.

“We want to extend heartfelt thanks to the first responders in Garwood for their tireless and heroic efforts during the night of the storm.”

Previous Republican platforms, supported by the current candidates, would have defunded not only the DPW but the entirety of our local government. The last time Republicans held a majority on Council, they voted down a desperately needed new garbage truck (which passed the following year with a new, Democratic majority) and opposed the current 8 full-time and 1 part-time member crew, which would have resulted in the firing of a full-time worker. They deliberately misrepresent the shared services agreement with Fanwood, which has saved the taxpayers of Garwood over $200,000 and also received an award from the Municipal Innovation Summit last year!

The current Council is working to restore local infrastructure, which was severely neglected under the last Republican Council majorities. Specific to the DPW, a new pickup truck, dump truck and garbage truck were funded, necessary equipment purchased, and building repairs completed.

Due to the impact of Ida, the DPW building sustained substantial damage. We call on the Council to investigate appropriate funding sources such as insurance payouts, FEMA relief and grants to offset the expense of a new building should it be necessary.  We are confident that Mayor Sara Todisco and this Council understand that Garwood’s property taxpayers are burdened enough, and now is not the time to stick them with the bill as proposed by the Republican candidates.