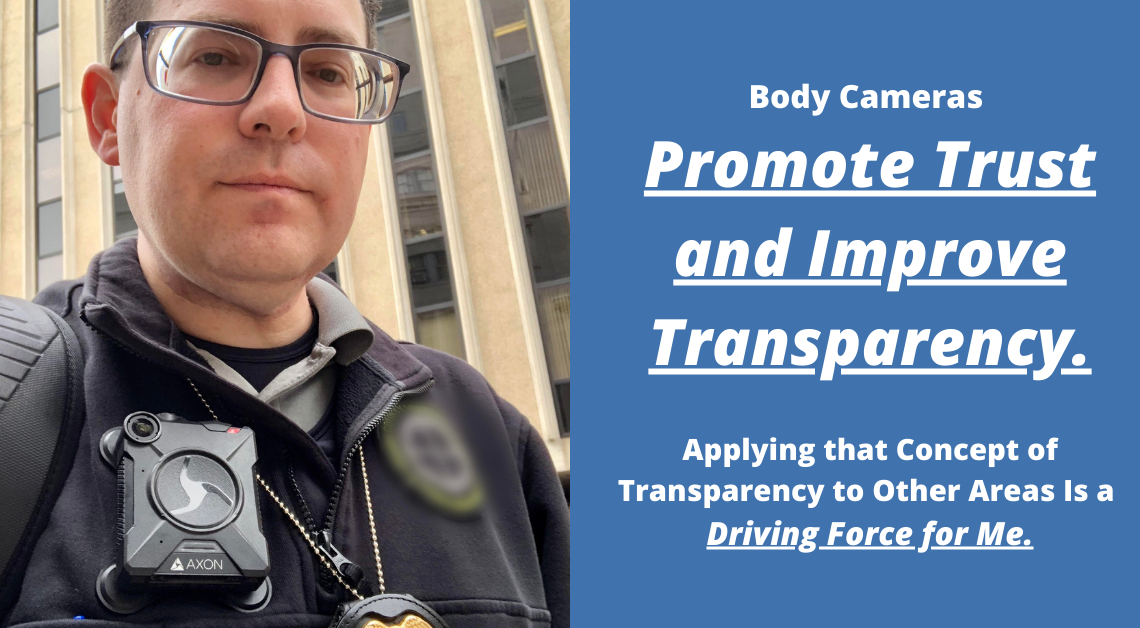 Transparency: What Police Body Cameras Can Teach Us All About Accountability

I am approaching this topic as someone who has been involved with numerous aspects of public safety for over 20 years.  I began my career as a 9-1-1 dispatcher right where I grew up, in Union Township.  I also volunteered as an Emergency Medical Technician for several years, worked as a Fire Department & Emergency Medical Dispatcher for Atlantic Health (in the dispatch center formerly known as “CenCom”), and have served in various capacities as a sworn law enforcement officer.

I am currently serving in the Union County Sheriff’s Office, where one of my duties is coordination and support of the office’s Body Worn Camera (BWC) program.  Through this work, I continue to see the very positive impact these devices have on a day-to-day basis.

I have always been a big proponent of BWCs within my profession, as they are an excellent tool for both the officers deploying them and the public being served by those same officers.  While BWC footage may not always tell an entire story, it often tells more of a story than we could ever learn without it and can serve as a way to put everyone’s mind at ease regarding the conduct of law enforcement officers.

We should take pride in the fact that our own Garwood Police were early adopters of BWCs and have also taken proactive steps to review the Use of Force policies.  With the launching of New Jersey’s new Use of Force Reporting Portal by the Office of the Attorney General in October and a statewide revision in the Attorney General Guideline for the Use of Force coming up soon, I look forward to both our Borough and our State remaining at the head of the pack in policy and training which sets law enforcement officers up for success.

It is essential for the public to have confidence that our law enforcement personnel receive excellent training, work under guidelines that promote transparency should force be required and are held to a standard through robust review and oversight processes (which often now include BWC video review).  Also essential is that our front line officers have the confidence they will be supported in the event force they use in the course of their duties is justified.

I can think of no better example where government transparency serves the public interest than in the use of force by law enforcement.  Applying the same concept of transparency to other areas of the government, such as actions taken by elected officials, is a driving force for me as a candidate.

If elected, I will apply the dual approaches of accountability and transparency I have learned over my public safety career to my role as a Councilman.  I am always up for a conversation on this and the other pieces of the Graham/Kearney Four-Point Plan for a Strong Garwood as this campaign continues!  Please reach out to me anytime by email at vincent@dems4garwood.com or by calling 908-413-5615.