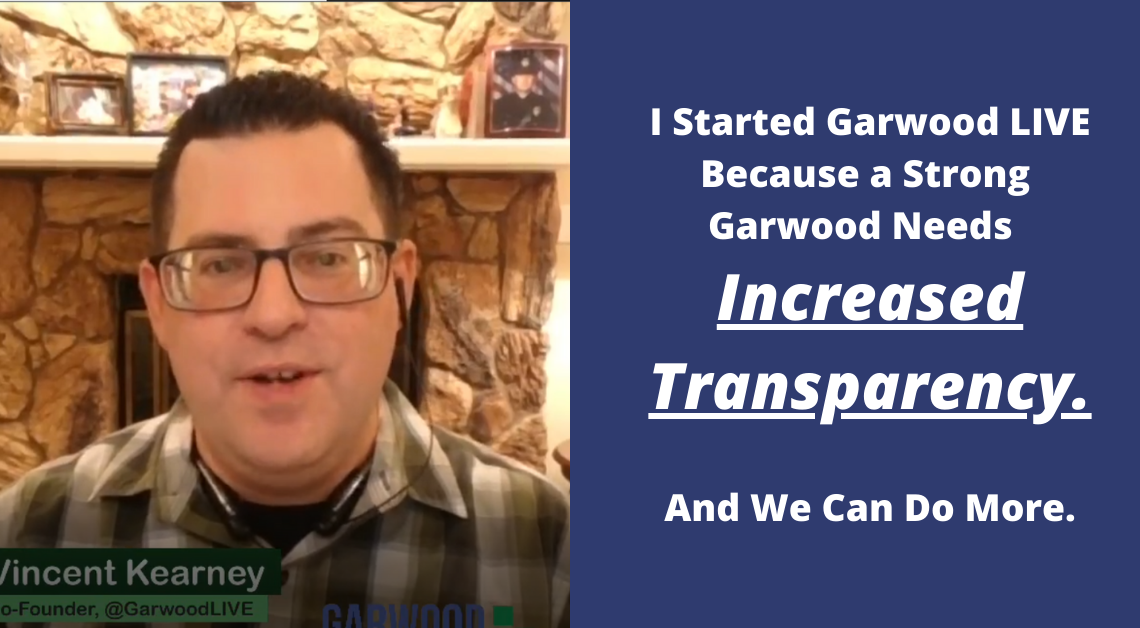 I Started Garwood LIVE to Increase Transparency. But It’s Time to Build on That.

For over two years, Garwood LIVE has now brought local government directly to the residents in just this way as a volunteer and self-funded service. While Garwood is well known for its volunteer spirit, some things require more support than volunteers alone can provide.

And that’s why I support—and would look to build upon—the current Public Information Officer position to include most of what I am currently doing as a volunteer. I have made it known that I favor the government live-streaming its meetings and posting video recordings of the live stream for reference purposes. But the PIO could also tackle other significant projects such as digitizing Borough records to ease OPRA access and permit processes.

But our opposition incredibly continues to stand against the employment of a Public Information Officer, a role that has helped residents be better informed of services available to them, which has been especially important during the ongoing COVID-19 pandemic. We, as citizens, have a right to have a transparent government.

Why this is so important is directly connected with why I started Garwood LIVE. Before Garwood LIVE, the local Democratic or Republican parties would sometimes record Council meetings and later post the footage. There were instances of edited footage, including missing remarks by members of the Council or the public. This doctored version of reality frustrated me. It had the potential to create distortions of the record.

In 2018, I witnessed yet another testy exchange between members of the governing body. I leaned over to my friend and Garwood resident, Hugh Sinclair, and said, “I wish more people could see this stuff going on.”

And so an idea was born. That night at The Station after the Council meeting, we came up with the concept: stream the video live and post the recording immediately after so there could be no question about the record’s integrity.

We hoped the presence of that camera would keep members of the Council—a few of whom seemed focused on disruption rather than public business—more focused and civil.  We settled on Facebook Live as the delivery method because it was the most popular social media platform. We both knew of online groups there like the Garwood Resident’s Connection, which had hundreds of active members.

After agreeing on the concept, executing it in environments that often had low lighting and acoustics so that everyone speaking was audible and understandable was the next challenge.  From the Council chamber to the multi-purpose room at Lincoln School over to the Pointe’s meeting room, each location where we attempted the live streaming process brought its challenges with clearly seeing and hearing what was going on.

Many hours (and quite a few dollars) later, we have developed a relatively stable platform at Garwood LIVE. We can deploy just about anywhere to meet the mission goal: Real-time viewing and an unedited record of events.

Executing this project has been a rewarding experience for me, but I also realized many in the public had come to depend on the live stream.  As this is a full volunteer service, what happens when Mr. Sinclair and I can’t attend a particular meeting or event?

While the Garwood LIVE platform for a Council meeting has become fairly simplistic to stream, it would require a significant level of knowledge to troubleshoot sound and video challenges. A person who hasn’t had any experience with our particular setup would likely struggle with this, impacting the platform’s ability to create the record for that event.

I approached the Mayor and Council on this topic in late 2019 and again in early 2020, regarding the need for the governing body to look more in-depth at this matter and even the potential need to update the Borough Code to catch up with the technology we were employing.

In early 2020, Councilman Graham spoke on the record about the need for the government itself to assume this responsibility, rather than relying solely on volunteers for a service the public had come to expect and depend upon.  With the hiring of a Public Information Officer, I was hoping we would turn over Garwood LIVE’s responsibilities.  While some progress has been made on this front, with virtual meetings of the governing body now a reality and a necessity due to the COVID-19 pandemic, there is more work to do on this topic.

If elected, a primary focus for me in 2021 will be making live streaming and video archives of Borough meetings fully a government service. My experience over the last few years has shown how valuable it is to shine a light on the meetings of Borough officials. It has shown how important it is to have a permanent and transparent record of what everyone is saying and doing at our public meetings.

Transparency is important in local governments, so we can hold our Council people accountable for their words and deeds.

I look forward to continuing the conversation on this and the other pieces of the Graham/Kearney Four-Point Plan for a Strong Garwood as this campaign continues.  Please feel free to reach out to me anytime at 908-413-5615 or by email at vincent@dems4garwood.com to discuss my favorite subject: Garwood!