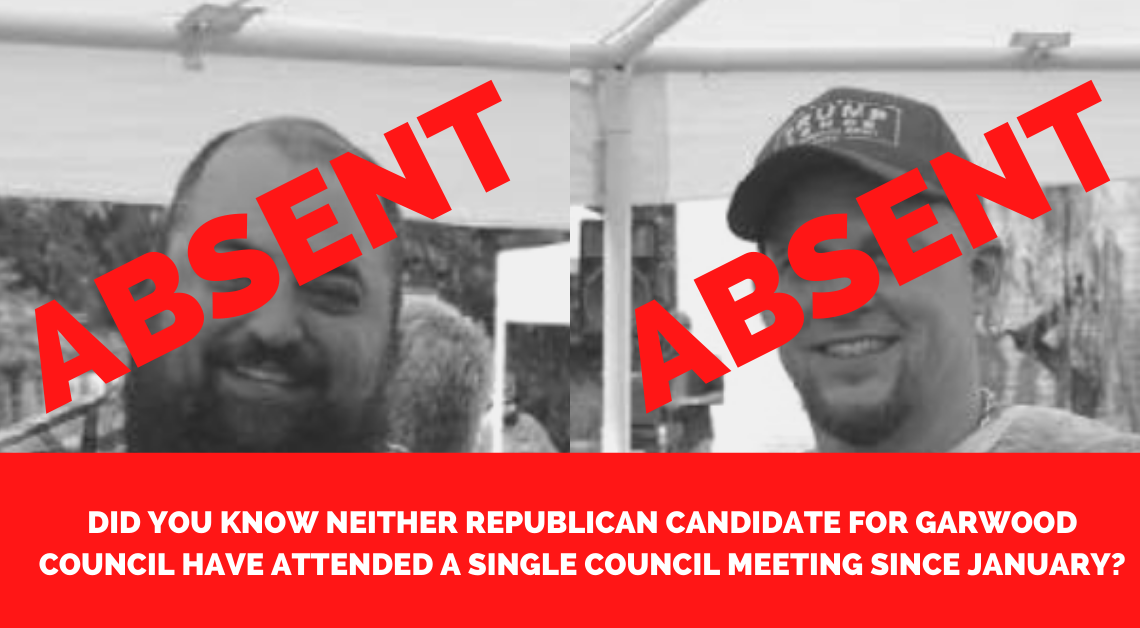 It is now October, and we are less than one month away from Election Day. And I am disappointed that neither of the Republican candidates for Garwood Council, Mr. Joe Nicastro and Mr. Jesse Wilson, have attended a single meeting of the Mayor and Council since January. I understand that we are all busy these days, but we have had 20 Council meetings this year, where we have provided transparency – answering and addressing residents’ concerns.

Yet, neither of these men attended a single Council meeting since January. If they have questions or concerns about the Borough, why haven’t they shown up? If they want to be the voice of residents, why haven’t they shown up? When you decide to run as a candidate for a seat on Council, that decision comes with several commitments, not the least of which is your time. To get the job done, you need to show up.

On the other hand, my running mate, Vincent Kearney, has shown that he is prepared to dedicate the time needed to be on Council. Since establishing Garwood LIVE in early 2018, Vincent has attended every Council meeting. And he was a regular attendee even before then. I do not expect a resident to attend every meeting, but I must ask why the Republican candidates running for seats on the Council have not shown up even once since January.

Due to the COVID-19 pandemic, many Council meetings this year have been held virtually and did not even require residents to leave their homes to attend. And many members of the public have taken the opportunity to join us virtually for one or more meetings. But still, we’ve had no sign of either of these Republican candidates.

Let’s be clear – their absence and lack of understanding of the Council’s roles and responsibilities are dangerous.

What the Republican candidates say online and what they send to our mailboxes is either full of insults, distortions, or outright fictions. For instance, in a mailer, they claimed that they would give residents the option of “suspending property taxes,” which may sound good, but is illegal and fiscally irresponsible. The State of New Jersey mandates property tax payment deadlines, and if residents have the option not to pay their taxes, how will the Borough pay for services that residents rely on like the Department of Public Works and the Police Department?

Is it too much to ask that candidates take an active interest in how the Council works and show up for meetings? Sadly, it would appear so in their case.

A strong Garwood needs Council members who will show up and get the job done. A strong Garwood needs a Council who are ready and willing to volunteer their time and effort to serve the people of the Borough. Vincent Kearney and I are prepared to serve you from day one. So I hope you vote this election and that we can count on your support to ensure Garwood remains strong.