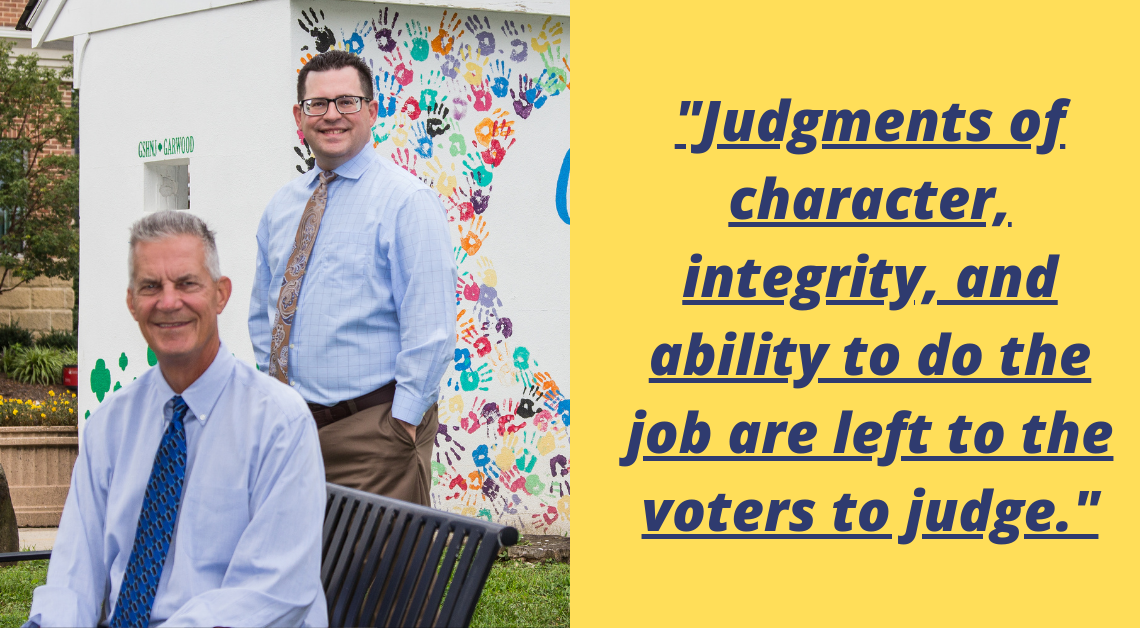 Accountability Matters in an Election

Official statements from this campaign originate from Councilman Russ Graham and Vincent Kearney.  Period.  Anything which appears on our mailers, website or presented by the campaign on social media is our responsibility.  Russ and Vincent do not sanction or approve “personal attacks.”  We will not make any and do not ask anyone to make them for us.

What’s not a “personal attack”? Demonstrating that Wilson and Nicastro lack the integrity or understanding to serve on the Borough Council, by literally using their own words and actions documented through their own social media accounts.  For instance, saying “these two candidates don’t attend meetings” is not a personal attack, when in fact, Wilson has not attended one public meeting we know of and Nicastro hasn’t been seen since January!

What is a “personal attack”? Social media posts are written by the candidates or their campaign, including a recent one full of lies about the Garwood Democrats being “Antifa” and wanting to defund the police.  Or the repeated attacks on Mayor Sara Todisco and sitting members of the Council, including their fellow Republican Rich McCormack who Wilson dubbed “Mclosttheelection” on Facebook.

Here’s the deal.  Wilson chose to lie about the severity of his arrest record–no one did that to him. An arrest record for distributing drugs. Wilson chose to make posts about QAnon, the Proud Boys, and showing off his anti-Semitic and homophobic views–no one forced him to.  Nicastro chose to make fun of staying at home and put profanity on his Facebook profile picture–no one made that up about him.  Nicastro posted photos of himself without a mask with his arm around voters in a pandemic–no one else did.

Jesse Wilson and Joe Nicastro are responsible for their well documented actions.  The Garwood Republican Committee is responsible for choosing these candidates to run and those decisions reflect the values of this town’s Republican party leadership.

Judgments of character, integrity, and ability to do the job are left to the voters to judge.  As candidates, we have both the right and the responsibility to inform Garwood’s residents about our opposition.

Because of COVID-19, we both felt it was the responsible choice to avoid the one traditional thing a Garwood Democratic campaign is known best for: Knocking on doors and meeting as many people in town personally as possible.  So we have innovated to get our message out.  Using technology to host virtual events, doing contact-free literature drops, and stepping up our use of mailings, text messages, and phone calls to bring ourselves and our plan directly to the voters.

Accountability follows responsibility, and we absolutely will hold both of these men accountable for their conduct using every means the political process provides.  We hope Garwood’s residents will join us voting for a team that will be ready to work for Garwood on Day 1—the Graham-Kearney ticket.  We urge any resident with concerns about this campaign, or who wishes to discuss the Graham/Kearney plan for a Strong Garwood, to contact us directly by email at info@Dems4Garwood.com as they consider casting their votes for us by November 3rd!